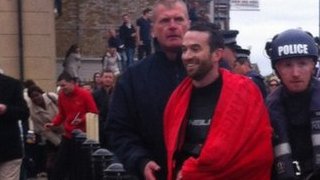 I haven't heard whether the smugly grinning fun-revolutionary who was arrested for wrecking the Boat Race has been charged with an offence. On the face of it, a Public Order Act Section 4 might be a runner (he has  cheerfully admitted planning and the intention of causing harassment alarm and distress). If he is a first offender he might be a candidate for a caution, but we shall see. If not, a fine or community order beckons, with prison as an unlikely possibility.  (Update: It's a Section 5, so fine or discharge only).
He is yet another in the tiresome succession of privileged people (Charlie Gilmour, any number of Redgraves, Tariq Ali and a thousand more) who decide to indulge themselves by buggering innocent people about in the interests of their gesture politics. The Guardian   reproduces some of his self-indulgent self-congratulatory ramblings so he has achieved what he set out to do. On the way to his aim of pissing off the 'élite' that he so despises, despite being part of it, he has also broken the hearts of the Oxford crew and taken the shine off Cambridge's win.

This summer London will be host to the over-hyped circus of the Olympics. Police and organisers must be quaking in their boots at the potential for disruption not just by  terrorists, but by old-fashioned fruitcakes.
(Another Update: The Telegraph quotes our man as being prepared to go to jail. If the charge remains as S5 POA, he can't because it is Level 3 fine maximum)
Posted by Bystander at Saturday, April 07, 2012