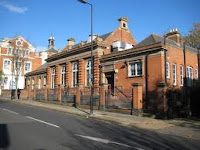 Acton courthouse, off the main Uxbridge Road behind the Town Hall, is a smallish building with just three courtrooms. It was decently built in Edwardian brick, and the main courtroom had nice high windows that admitted lots of natural daylight. I sat there a few times, including a number of Crown Court appeal sittings that were moved while Isleworth underwent a major rebuild. On one occasion my JP chair sitting was enlivened by an almost-successful escape, in which an impressively agile young offender scaled a ten-foot sheet of armoured glass to drop into the empty public gallery. He tried the door, found it was locked, shouted "Fuck!" and climbed back whence he had come. The Serco guards looked dazed and confused, so our man ran off into the court's lobby area, where he was felled by a quick-witted PC who was waiting to give evidence in another case.

Acton closed forever a few weeks ago. Within days of the closure persons unknown stripped the roof of its lead.
Posted by Bystander at Friday, June 24, 2011