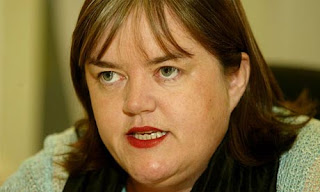 The ridiculous 'Respect' agenda is pretty much dead, but its corpse still carries on twitching, rather like Olivier's Richard III in the eponymous film. The appalling Louise Casey (above) is still flogging her 'community justice' agenda despite most of its proposals having been howled down by those who actually understand how the system works. The Blair régime was star-struck by the New York Red Hook project and put a version of it in North Liverpool. The 'Community Justice Centre' had shedloads of cash thrown at it, and unsurprisingly started to achieve some respectable results. It hasn't been and won't be replicated because it is far too expensive to operate across the country. We were promised 'Community Courts' in the church hall with 'community representatives' - i.e. the usual bores and obsessives to tell us how to sentence. Cost and security issues killed that one. I nearly hurled my eggy soldier across the kitchen this morning when I read in The Times that the 'Public will get chance to choose judges' and have a say in how crimes are prosecuted. We are going to get 'community prosecutors' and more. The full horror story is here.
In the whole mishmash of Civil Service gobbledegook, about the only sensible idea is putting the outcome of convicted cases online. One of my main motives in starting this blog was to throw light on the processes in the lower courts, and more information about real sentences can only aid reasoned debate.
Fortunately this bunch of clowns have another year at most to carry on tinkering with the system, and even more fortunately whoever follows them won't have the cash to throw away on whizzy new schemes. Surely the Civil Service can find something constructive for Ms. Casey to do?
Posted by Bystander at Thursday, April 30, 2009