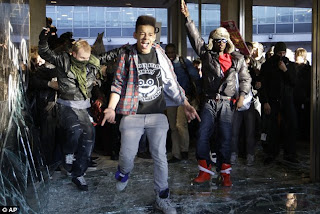 Today's headlines about yesterday's demonstration that got out of hand induced a few minutes' nostalgia here at Bystander Towers. I was at university in 1968 when radical students were mostly Marxists or Trotskyists, and the big issue was the Vietnam war. Across the Channel the 'Évenements' of student and worker protest caused a few lively nights in Paris, and the workers at Renault welded the gates of their usine shut. President DeGaulle took the precaution of squaring the generals before deciding how to handle matters.
A few coachloads of students went from my university down to the big Grosvenor Square demo and the ensuing scrap with the police led to the same sort of headlines that we can read this morning. Then, as now, there was concern, there was anger, there was indignation, but above all, the whole thing was tremendous fun for the participants.
Whether you are a member of the Bullingdon or a militant Trot, the sound of breaking glass is deeply satisfying to a young man, and today, as in 1968, the press reports will be avidly scanned by the protesters. Politicians and columnists will huff puff and fulminate, and in a week or two the whole business will be forgotten.
The leaders from 1968 must be feeling nostalgic too. Jack Straw, still a student in the second half of his twenties now a right-wing Rt.Hon., Tariq Ali (comfortable media person) Daniel Cohn-Bendit (aka Danny Le Rouge) (Eurocrat) Anna Ford, then President Manchester SU, (media celeb) will all be able to get out their press clippings and have a good old wallow. From Right-on to Rt.Hon is quite a leap.
Ironically, mine was the most spoilt and indulged student generation ever, with grants, new facilities, plenty of academic staff, and firms eager to snap up the four per cent or so of young people with degrees. Now where's that photo album?
Posted by Bystander at Thursday, November 11, 2010