What Would You Do? (One of a Series) 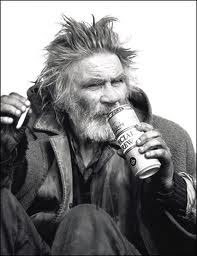 It is afternoon in the remand court. Into the glassed-in secure dock shambles a red-faced, wheezing, unkempt man who may be around 50. He has breached his ASBO, again. The prohibitions in the Order are i) Not to drink from any open can or bottle in the Borough and ii) Not to cause harassment alarm and distress to anyone.
In the past he has been given conditional discharges, fined (sometimes deemed served by time spent in custody) and prison. He was released from his latest sentence of (nominally) sixteen weeks four days ago. With utter predictability he took his discharge grant straight to the off-licence, and was back in custody before three full days had elapsed since his release, having staggered and slurred his way along a local parade of shops to the understandable alarm of a shopkeeper.
Now breach of an ASBO is a serious matter, either-way, so it can be sent to the Crown Court for sentence, where Hizonner has up to five years' custody available to him. Our colleagues have previously imprisoned this man for something approaching our maximum powers, short of sending him upstairs. Should we up the ante? Have a look at the guidelines for Breach of Asbo. It's pp.24-25 of the pdf.
Being drunk is a fineable-only summary offence. So is Section 5 Public Order Act, which is pretty much what the second prohibition amounts to (and, incidentally, may be a bit dodgy according to the case law).
You, like me, are sitting in front of your computer, possibly with a cup of tea or something stronger, and you can, if you choose, take a sternly mechanistic view, follow the guidelines, and send him up to the wigs for a likely nine months.
But the other day my colleagues and I were looking into the bleary eyes of this wreck of a man. I was pretty sure that he hadn't much idea what was going on, despite his plentiful previous convictions - they seem to wash over him.
We had the Guidelines. We had our collective experience as JPs. We had a junior prosecutor following her instructions to press for a top-end disposal. We had a world-weary duty solicitor who had seven custodies and a dozen or so others to see, who was expecting the inevitable for his client, but went through the motions in a professionally credible way. But I must add - the shopkeeper who called the police was distressed and upset, inconvenienced by a ranting drunk in the doorway of her shop, and needs to be protected.

We were thrown back on first principles.

So what would you have done?
Posted by Bystander at Thursday, August 05, 2010