So Shut Up With The Sorry Already 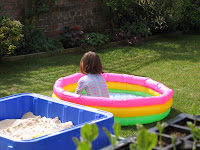 I was already becoming sick of the current insistence that everyone who falls out of favour must apologise for their behaviour. Absurdly, some offenders are required to write a letter of apology to those they have wronged. Well I know what my late mother would have done on receipt of one such, and it would not have been a sigh of 'so that's all right then'.
I spent last Sunday with my lovely granddaughters, the elder of whom is 5. There was a spat involving the paddling pool and some water. My daughter stepped forward to insist that the offending child said sorry to her sister. There was stubbornness, eyes were cast downwards, and the little girl was threatened with an early visit to the naughty stair and the loss of some privileges. Eventually, eyes averted from her sister, she mumbled 'sorry', and two minutes later all was peace and harmony.
And isn't that just what happens with a court-ordered apology, or the current Parliamentary fiasco? Almost anyone will say an insincere 'sorry' when they hope it will avert the loss of liberty, or a bag of sweets, or even a seat in Parliament.
Posted by Bystander at Thursday, May 14, 2009