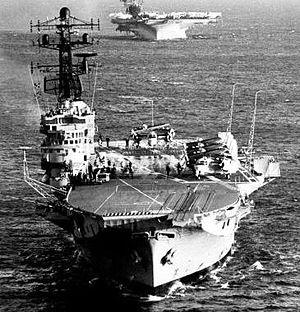 Sorry, but I couldn't resist this from Wikipedia, especially the last sentence:

The Australian aircraft carrier HMAS Melbourne (R21) was the lead ship of the Royal Navy's Majestic class of light aircraft carriers. Operating from 1955 until 1982, she was the third and final conventional aircraft carrier[I] to serve in the Royal Australian Navy (RAN). Melbourne also served as the RAN flagship, and was the only British Commonwealth naval vessel to sink two friendly warships in peacetime.

Thanks to the exotic bogol for the heads-up.
Posted by Bystander at Tuesday, September 16, 2008