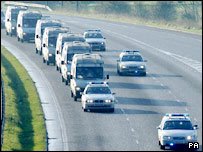 I have every sympathy with the difficult job that the police do, but I have to say that their middle management does not always impress me.
The murder of a PC in Bradford is being investigated, and I hope that the law will take its course. Many of us have been aware for a long time just how sophisticated and far-reaching police surveillance technology has become, and its latest developments appear to have assisted in the arrest of a number of suspects.
But did you see the TV news footage of those suspects being taken up the M1? Something like a dozen vehicles, including many armed officers, proceeding at a stately speed up the motorway, with junctions closed as they passed, and other vehicles being kept away. At the scene of the murder, armed officers stood about in their baseball caps, looking at the cameras that were looking at them.
What exactly were the police so worried about? This wasn’t Al-Quaeda or the IRA, was it? The police are looking for a bunch of small-time losers, albeit armed ones, who tried to knock over a travel agency in a run-down part of a run-down town, not a paramilitary group. Was it really so necessary to deploy scores of officers (who could presumably be more use elsewhere) on escort duty, or on standing around in the cold cradling a Heckler and Koch automatic carbine? Did anyone seriously fear an attempt to release the suspects, or to burst into the crime scene and mess up the evidence?
I suspect that every time a middle-ranking officer sees this kind of grandstanding he becomes determined that when it’s his turn to be in charge, he too will throw everything he has at the problem for the benefit of the cameras. Where is the managerial assessment of the problem, and the proportionate use of resources?
Posted by Bystander at Tuesday, November 22, 2005