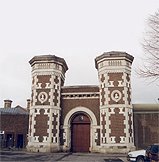 The highest penalty available to a criminal court is that of imprisonment. For magistrates the maximum sentence is six months, or twelve months where there are two separate either-way offences being dealt with. The first time that I ever signed a warrant committing someone to prison my signature was shaky as I contemplated the awesome responsibility. Now if I have to tell someone that they are going inside I make sure that I look them straight in the eye and tell them as crisply as possible what is happening and why. If the defendant comes to court on bail and is in the open dock we call the clerk outside to check the legality of our decision and then a phone call is made to the cells. Officers wait outside the courtroom, and only come in after the sentence has been announced. Most defendants take it calmly, but the odd one might make a fuss: if his record suggests that he might cause trouble a couple of extra officers will come up, and he might even be handcuffed before being taken down.

Every newly appointed magistrate has to visit a prison and a young offenders' institution, and we make regular refresher visits to keep up to date with what is going on. For adult prisoners there are four categories, from A to D, reflecting the likelihood of their trying to escape and the danger to the public. Category A means the highest level of security, while category D is likely to be in an open prison.

We usually start off by visiting the local prison to which we send most of our remand prisoners and those beginning their sentences. Short sentences are normally served locally, as there isn't time to assess the prisoner and allocate him to an appropriate prison before his sentence comes to an end. The biggest prison in West London is Wormwood Scrubs, built in the 19th Century (by prison labour - even the bricks were baked on site from clay taken from what is now the cellars!)holding just over 1100 men. The main gate of the Scrubs is well known from television, and when you pass through security the first thing that you see is the enormous chapel (as big as a large parish church) also built by prisoners. Behind the altar are a number of paintings done by inmates about 100 years ago, painted on mailbag canvas. The prisoner in charge of the chapel is very proud of it, and is always anxious that visitors should see it at its best. When I last went he was a tall, bespectacled, softly spoken man. We later found out that he was doing life for murder.

Officers told me that the lifers' wing has a more relaxed regime than the rest of the prison and that a few more comforts are allowed in cells than for short term prisoners.

A standard cell holding two men is about thirteen feet by seven and, nowadays, has a toilet and washbasin, although until a few years ago sanitation consisted of a plastic pot, used in full view of your cellmate. At the risk of offending my more sensitive readers, in the old days it was normal for cons to defecate on newspaper, wrap it up and throw it out of the window. Most cells have a small TV set, which the officers find useful, because a threat to take away the telly is a powerful disciplinary weapon.

Open prisons have a much more relaxed regime - in fact the doors are locked at night to keep intruders out, not the inmates in! Prisoners nearing the end of long sentences are gradually moved into open conditions and as many as possible are put into 'proper' jobs in the community, earning real wages, to help their re-absorption into society.

I have said before that most people think that anything other than prison is a let-off, and that prisons are too soft. A very experienced officer once said to me:- "Some of them swagger in, of course, and give us a bit of lip. But 95% of them have a good cry once we lock the door on the first night."
Posted by Bystander at Tuesday, November 15, 2005